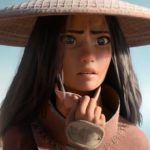 Disney has released the official full trailer of its upcoming animated film, Paradise and the last dragon, Kelly Marie Tran and Auquafina voice the title characters. It differs in that it is the first Disney animation feature to be remotely developed in response to the COVID-1

Disney first announced the film during D23 Expo 2019 and introduced co-directors Don HallThe Great Hero 6, Moana) and Carlos Lopez Estrada (Frozen II, Blindspotting) in D23 next year. The fictional fantasy land of Kumandra was inspired by several different cultures of Southeast Asia – Thailand, Vietnam, Cambodia, Myanmar, Malaysia, Laos and the Philippines – and the production team traveled extensively to most of these countries to explore the film. The Laotian visual anthropologist also reviewed the final designs.

According to the official abstract:

Paradise and the last dragon takes us on an exciting, epic journey to the fantastic world of Kumandra, where humans and dragons have long lived together in harmony. But when an evil force threatened the earth, dragons sacrificed themselves to save humanity. Now, 500 years later, the same evil has returned, and the lone warrior, Paradise, needs to find the legendary last dragon to rebuild the broken earth and divided people. However, during her journey, she learns that to save the world will need not only a dragon, but also trust and teamwork.

The trailer opens when Raya encounters Little Noah, seemingly abandoned in an alley, only to discover that the tiny scammer possesses some formidable acrobatic and fighting skills. She recruits children to search for the last dragon along with Tong and Bone. But they are not the only ones hunting for Sisu, and when Raya finally finds her, Namaari and her followers are waiting. “You and the dragon are coming with me,” Namaari declares, but Raya doesn’t have that. “My sword here says we’re not.” Perhaps we can expect epic skirmishes between them in the film’s finale.

Paradise and the last dragon premieres March 5, 2021 simultaneously in theaters and at Disney + (with premier access) due to the ongoing COVID-19 pandemic.