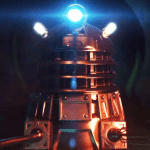 Whovians rejoice, as a new Doctor Who game – The Edge of Reality – is coming to PC and current and next-gen consoles in 2021.

New gameplay, monsters, and worlds are teased, including the Cybermen, Daleks, and Weeping Angels. The player will aid the Doctor by wielding the Sonic Screwdriver to defeat a “universe-spanning threat” in a continuation of the story beats experienced in The Edge of Time.