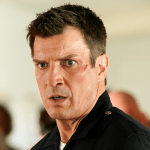 The Rookie is currently in production, and the ball will keep rolling on it despite more positive tests for COVID-19 among the crew of the series. First up, in case you missed it, the Nathan Fillion starrer is coming back for another season on ABC. Cut to this fall, and production has commenced on Season 3 of the cop drama. It has not been smooth sailing for the ABC show, though.

According to Variety, five crew members have tested positive for COVID-19 as filming on Season 3 of The Rookie has commenced. Despite the positive tests, The Rookie’s production company Entertainment One is continuing to film after they confirmed that the set underwent a “deep cleaning.” While Netflix’s head honcho has reported protocols saving money, an intense cleaning sounds expensive.

In further precautions, crew members of The Rookie who tested positive for COVID-19 are self-isolating, and those they came in contact with were notified. The cop drama, which ended Season 2 with Nathan Fillion’s John Nolan suffering a huge betrayal, is not the first show in a coronavirus world to continue filming despite positive tests. CBS’ Young Sheldon temporarily paused production after one of its production crew members tested positive.

What sets The Rookie apart is how it has decided to soldier forward. Young Sheldon’s pause only lasted through the weekend, whereas Days of Our Lives suspended production for two weeks following a positive COVID-19 test in the production team. The Rookie is choosing to move along without much fanfare, so Season 3 presumably should not see a premiere delay.

The fall season, which usually would have included The Rookie, has been in flux ever since the COVID-19 pandemic originally began impacting productions. Earlier this year, it led to an industry-wide shutdown that led to seasons ending earlier than scheduled. From there, the industry has slowly crawled to a start with TV soap The Bold and The Beautiful being the first network show to start filming again.

The Bold and The Beautiful utilized latex mannequins as it began its early days of steamy on-screen passion. There is no reason to believe that The Rookie will have to follow suit. It is a cop drama first and foremost. As for when it will come back, the Nathan Fillion-led series, like many others, is set to return later than usual due to the delays brought on by COVID-19.

Fans are undoubtedly anxious to see where the show picks up after its jaw-dropping finale. When The Rookie returns, it will have to deal with the fallout of John Nolan being framed as a dirty cop by Harold Perrineau’s Detective Nick Armstrong. The evidence was hidden in Nolan’s walls, making it tricky to find.

Just as Nathan Fillion’s protagonist had discovered the “evidence,” the cops arrived at his home. Cue the dramatic music and John having a lot to account for when the show starts! It will be interesting to see how he will explain things. The Rookie does not have a premiere date for Season 3, although it will probably arrive after this fall’s premieres.