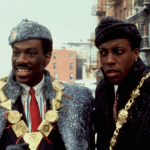 Amazon has confirmed its acquisition of “Coming 2 America.” The sequel will launch globally on Amazon Prime Video on March 5, 2021.

“Coming to America was a cultural phenomenon that is one of the most loved and celebrated comedies of all time,” said Jennifer Salke, Head of Amazon Studios, in a statement. “Thanks to Eddie Murphy’s comedic genius along with the brilliant filmmakers, writers and fabulous cast, we couldn’t be more excited to celebrate this new adventure. We know audiences around the world will fall in love with this hilarious, joyful movie that will surely become a timeless favorite.”

Producer Kevin Misher, added, “What could be better than a return to Zamunda? We are so excited for Amazon Studios to bring Eddie Murphy and Coming 2 America to a worldwide audience where they can laugh again with characters they have loved for 30 years, and meet new ones that they will love for years to come.”

Earlier: “Coming 2 America,” the sequel to the 1988 Eddie Murphy classic, is reportedly in the process of being sold by Paramount to Amazon Studios. The deal, first reported by Deadline, is in the neighborhood of a whopping $125 million.

Variety reported that the movie is set to premiere on Amazon Prime December 18, presumably bypassing theaters amid struggles for the exhibition sector during the pandemic.

The sequel follows African prince Akeem (Murphy), who in the original John Landis-directed film heads to New York to escape an arranged marriage, as he readies to become king of a fictional African country. He discovers a son he never new about in America, and Akeem and Semmi (Arsenio Hall) head back to America to groom the son as the next crown prince. James Earl Jones also reprises his role. Tracy Morgan and Jay Pharaoh are also in the cast.

For its part, this is just the latest instance of Paramount unloading a film to a streamer this year and the second film the studio sold to Amazon.

Netflix this year bought from Paramount Aaron Sorkin’s “The Trial of the Chicago 7,” the rom-com “The Lovebirds,” and an untitled Ryan Reynolds/Shawn Levy adventure film. The Mark Wahlberg adventure film “Arthur The King” is now at Lionsgate and Stefano Sollima’s “Without Remorse” is set to be released by Amazon.

The “Coming 2 America” news comes a day after Disney, the theatrical behemoth that owned 40 percent of last year’s domestic box office, announced it would restructure its business to favor streaming. Many theaters across the US reopened over the summer to get ready to show Christopher Nolan’s “Tenet.” It spent five weeks at the number-one spot until last weekend, grossing a lackluster $48.3 million.

Meanwhile, number-two theater circuit Regal Cinemas is temporarily closing nearly all of its 536 of its US locations once again, as number-one chain AMC Theatres warned Tuesday that it could run out of cash by the end of the year. The chain cited a reduced number of releases from studios as part of the risk; tentpoles such as Bond entry “No Time To Die,” have moved from scheduled fall releases to next year.