all-trailers.com > Home page > Movie News > The Rock Realizes He Can’t Fit In A Porsche Taycan While On Movie Set 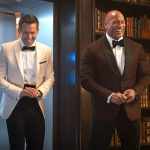 The film crew was Taycan by surprise.

It’s safe to say Red Notice is a huge deal for Netflix considering it’s one of the streaming platform’s most expensive movies ever. Originally under development with Universal for a 2020 launch, the action-packed movie has a budget of nearly $188 million and will be out in 2021. It’s the first Netflix movie starring Dwayne Johnson and Gal Gadot, while Ryan Reynolds will be making his second appearance after starring in 6 Underground.

Filming for Red Notice hasn’t exactly been smooth sailing taking into account the coronavirus pandemic put the brakes on production earlier this year. Work on the movie resumed in September, but it wasn’t without hurdles as “The Rock” took to Instagram to reveal a funny yet costly problem he had. Long story short – he couldn’t fit inside a Porsche Taycan that was brought on set to shoot a scene.

The “big chase sequence” as described by the former professional wrestler took months to prepare and high production costs, which included buying a Porsche Taycan and shipping it to the film location. When the time came to shoot the scene, writer and producer Rawson Marshall Thurber (the man seen here lying on the ground in front of the car) told The Rock to hop inside the EV, only to realize his back “is a bit too wide.”

The unexpected issue didn’t stop the producer and the rest of the film crew from figuring out a good angle to take the needed shot: “In the end we showed our agility to think quickly on our feet and found ‘creative’ ways to still get the shot. “

Actually, this isn’t the first time Dwayne Johnson has a problem fitting in a car, which isn’t all that surprising considering he’s 6 feet 5 inches (196 centimeters) tall. About five years ago, he complained about having an identical problem with a LaFerrari.