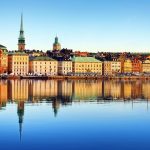 Modern television is literally overwhelmed with American-made TV shows, of which many viewers are already tired. Featuring dozens of TV shows of varying quality every week, the US television industry is on a roll. Surely, viewers can choose British TV shows with their unique charm or French TV series as alternatives. However, let’s turn our gaze to the north, paying attention to Sweden that boasts of its wonderful TV serials with almost each tells a deep story framed by beautiful camera work and wonderful actors.

So, we have compiled a list of the best TV shows produced by Swedish filmmakers.

The Bridge is a Swedish-Danish TV show that is legendary.

One day, a woman’s body was found on a bridge connecting Malmo and Copenhagen. Thus, the body is located on the border between Sweden and Denmark. Police from both countries, who arrived at the crime scene, found another body. Someone killed two women and laid parts of their bodies on either side of the border. Dane Martin Rohde and Swede Saga Noren, two detectives, are investigating this strange case. With its graceful plot model, this TV series has captured the attention of viewers around the world, making this detective series arguably the most famous Scandinavian TV show. With intrigue, drama, detective plot, great acting and the opportunity to observe representatives of two countries that are such consimilar – but very different – at the same time, this TV show impresses with many things.

You will be eager to watch every new episode of The Bridge. And if you haven’t started watching yet, it’s time to correct this misunderstanding.

It is noteworthy that The Bridge is a record-breaking series for the number of remakes in which the very first corpse was also found on the border between the United States and Mexico, under the English Channel (Great Britain-France), on the bridge over Narva (Russian TV series) and on a mountain pass between Austria and Germany. In addition, there is an Asian TV show produced by Malaysia-Singapore, which is also a remake of the original Swedish-Danish TV series.

The TV show takes viewers to the town of Ystad, located east of Malmo. Kurt Wallander, a brilliant detective who loves opera and alcoholic drinks, lives here. Remarkably, Wallander is an iconic figure in Swedish culture. It was introduced to the world by Henning Mankell, the Swedish writer who released the “Faceless Killers” (Swedish – “Mördare utan ansikte”) novel in 1991. There are another 12 books dedicated to this character released over the next decades. With Wallander’s full-length films already shot countless times, now is the time to bring the famous Commissioner to television screens.

The first episode of Wallander’s TV series starring Krister Henriksson premiered on 14 January 2005 on the Swedish channel TV4. The TV show ran for 3 seasons, with some episodes shown in theaters. The TV series has attracted a lot of attention of filmmakers from different countries. A British remake starring Kenneth Branagh as Commissioner was premiered on BBC One in 2007.

There is also one more TV show related to the Swedish inspector that was premiered in the fall of 2020 on the Netflix streaming platform. The new TV series follows the detective’s early years in Malmo.

This TV show features another literary character – created by Åsa Larsson this time – migrated to television from the pages of detective novels.

Rebecka Martinsson is a successful lawyer based in Stockholm. One day, a woman goes north to the town of Kiruna, where she comes from. Something strange happens here – the lawyer sees the most real murder in the sudden death of a local priest. Nothing can stop the main character of a TV show until she gets to the bottom of the truth. With a traditionally slow-moving storyline, the Rebecka Martinsson TV show presents viewers with the curious intrigue and incredible beauty of the northern landscape.

At the moment, the series has been on air for 2 seasons. However, it is likely to be renewed, since its literary source has 5 books in total.

This TV show invites us to stay a little longer in Kiruna, adding a little French charm to the plot. Kahina Zadi, a Parisian detective, came here to investigate the murder of her compatriot. Unfortunately, this death is only the first one in a chain of bloody massacres. Throwing herself into the abyss of the difficult relationship of the inhabitants of Kiruna with her partner (Swede Anders Harnesk), Kaina soon finds out shocking things.

Midnight Sun is a gripping multi-part crime thriller that strikes a great deal of attention to issues of nationality, as the TV show’s plot offers a clash of not only Swedish and French cultures, but also a meeting with the Sami, a people living in the north of Scandinavia.

Fortunately, this mini-series contains only 8 episodes, because it will be difficult for you to stop watching them.

The small village of Silverhöjd is located at the edge of the forest of the same name. Previously lived here, Eva moved immediately after her daughter disappeared in the forest. The girl’s body could not be found. Suddenly, another child disappears into the forest. This time, Eva must find out what is happening in the bloody Silverhöjd.

The creators of the TV show managed to recreate frightening – but majestic at the same time – picture of an age-old forest where anything can hide. At some point, when watching TV series, an ambivalent feeling arises – although you want to admire the forest, you are shivering at every new sound it makes. Overall, Jordskott tells a gripping mystical story with a highly unpredictable storyline.

With 15% of the Swedish population watching Season 1, Jordskott is a hugely popular TV show. The second season of the television series was released after a year and a half. It is not yet known whether Jordskott will be renewed for a third season (there have been no official closure reports yet).

Focusing on multiple storylines, the TV show Real Humans also tells the story of the emergence of self-awareness in humanoid robots. Having become aware of who they are, some androids are frustrated with their position in human society, since anyone who has self-awareness is unlikely to agree to the role of a servant or a sex worker. In addition, some people oppose the existence of humanoid robots posing as who they are not – humans.

Engaging in a discussion about who the human really is, Real Humans invites viewers to reflect on where the line separates people from robots similar to them is. With a great response from the public, the TV show concept has led to numerous remakes of Real Humans by filmmakers from different countries. At the moment, this fantastic TV series has a British version. In addition, the Chinese remake of the original TV show is preparing to premiere.

Ängelby Featuring One Season with 12 Episodes (2015)

Ängelby is another TV series filmed in the genre of the so-called provincial mysticism. Vera, the main character of the TV show, is going through hard times. Looking for work, she agrees to move to a certain town of Ängelby. However, something strange happened at the moment when Vera crossed the border of the town in her car. And then the audience will find many more terrible things.

Providing a very disturbing atmosphere, Ängelby does not let the viewer know if he/she is dealing with an ordinary drama or a show featuring an admixture of something mystical? Regardless of what the true genre of this television series is, it is undoubtedly worth watching.

The long-awaited multi-part adaptation of Fredrik Backman’s bestseller “Beartown” about the life of a small town called Björnstad was premiered in the fall of 2020 on Scandinavian HBO. Both the novel itself and the TV series based on its plot tell the story of how life in a small town slows down over time. Immersed in deep depression, the inhabitants of Bjornstad emerge from suspended animation only through sports competitions. The local ice hockey team is the emotional core of the entire town. On the eve of the next hockey game, it become known that seventeen-year-old Kevin, the team’s leading hockey player, is being held as a suspect in the case of the rape of a teenage girl.

Beartownin a very non-trivial way talks about topics that have disturbed society for many years, and have become especially relevant recently. Well received by audiences, the TV series about Bjornstad’s life is likely to be renewed for a second season. By the way, “Us Against You” (Swedish – “Vi Mot Er”), another novel by Backman about the Swedish countryside, was released in 2017. So, it can serve as the literary basis for the new season of the TV show.

The Restaurant is a multi-part historical drama about the life of post-war Sweden. The story begins in Stockholm, where Nina and Calle met accidentally. Just one fleeting kiss launches a dramatic story of love, poverty, power, feelings, money and crime.

In four seasons of the TV show, the story of the Löwander family unfolds over several decades. Through the eyes of the Löwander, a dynasty that owns the famous Stockholm restaurant, viewers can trace the post-war history of Sweden – from the joyful and at the same time difficult 1945 to the 1970s.

A hugely popular TV show in Sweden, The Restaurant has won numerous television awards. The latest season of the television series was premiered on September 25, 2020.  At the moment, the further fate of The Restaurant is still unknown.

Like the previous TV series on this list, Miss Friman’s War again shows Stockholm to viewers – however, it takes them to an even more distant past (1905). Froken Dagmar Friman arrived the Swedish capital to receive part of the inheritance leaved by her father. However, the lady’s hopes are dashed by the harsh realities of the 20th century. Having come into conflict with her brother who does not want Dagmar to lead an independent life, Fröken Friman finds like-minded people with whom she wants to make a cooperative. The woman wants to open a shop employing only female workers. By the way, Anna Whitlock, a suffragist who has done a lot to develop the feminist movement in Scandinavia, is the prototype of Friman.

Miss Friman’s War television series tells a dramatic story. Although it takes viewers more than 100 years ago, nevertheless touches on things that disturb even modern society on the threshold of the third decade of the 21st century.