The film “One more” became the triumphant of the European “Oscar”

all-trailers.com > Home page > Movie News > The film “One more” became the triumphant of the European “Oscar” 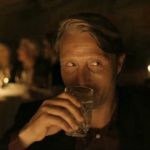 The film “One more” became the triumphant of the European “Oscar”

The Danish tragicomedy “One More Each” with Mads Mikkelsen won four European Film Academy Awards, including Best Picture. The ceremony took place on Saturday evening both in Berlin and in virtual format.

The director of the film, Thomas Winterberg, received awards for directing and writing, sharing the latter with Tobias Lindholm. Mikkelsen took the Best Actor award. Paulo Bier from the film “Ondine” was recognized as the actress of the year by the academicians.

“One More” tells the story of four fellow teachers who decide to experiment: they will drink some alcohol every day to make up for the lack of creative energy. Gradually, their lives turn into an alcohol-marathon, the way out of which will not be easy to find. The film was supposed to participate in the Cannes Film Festival, but it was canceled due to the pandemic. Denmark has officially selected One More One Up as its nominee for the International Oscars and other awards.