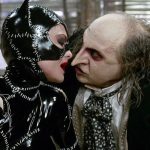 The comic book movie franchise seems to be moving in something of an unexpected direction, with both Marvel and DC looking to introduce the idea of a multiverse. Now, salt at the ready, but It’s looking increasingly likely that the latter are doing this through The Flash movie, and with Michael Keaton’s version of Batman all-but confirmed to return, a new rumor suggests that Batman Returns’ Danny DeVito is now being courted to resurrect his version of Oswald Cobblepot AKA The Penguin.

Released in 1992 and directed by gothic movie maestro Tim Burton, Batman Returns is the sequel to 1989’s Batman. The second and final installment in the “Burton-verse”, Batman Returns finds the DC icon facing the Penguin, who is plotting to kill all of Gotham City’s firstborn sons, while also dealing with Catwoman, who is seeking vengeance against Max Shreck, a corrupt tycoon who allies with the Penguin to bring Gotham City under his control.

Starring Michael Keaton as Bruce Wayne/Batman alongside Michelle Pfeiffer, Christopher Walken, and Michael Gough, the movie introduced audiences to Danny DeVito as the Penguin. A psychopathic, deformed man who is abandoned as a child, much like the rest of Burton’s Batman movies, the character leans more heavily into the animalistic theme of his alias. Though very small in stature, DeVito’s Penguin is a terrifying creation and would surely delight fans should a cameo in The Flash come to fruition.

The Flash is now set to begin production early this year, and will take inspiration from the comic book arc, The Flashpoint Paradox, which sees the Fastest Man Alive travel back in time in order to save his mother. However, his meddling with time finds him emerging in a bleaker universe in which the Amazons and Atlanteans are involved in an all-out war that has left the planet destroyed. While the source material features an alternate version of Thomas Wayne who has now become a much more violent Batman, it seems that The Flash adaptation will bring back Keaton’s Caped Crusader instead, with Ben Affleck’s Batman also set to feature.

Details of Keaton’s involvement are still rather scarce, but, thanks to comments from DC Films’ president Walter Hamada, rumors recently began to emerge that Warner Bros is hoping to sign the actor up for multiple projects. “Warner Bros. will have two different film sagas involving Batman – played by two different actors – running at the same time,” Hamada said.

Since then, the comments have been clarified by Brooks Barnes, the New York Times writer, who said, “Been offline (moving apartments) and return to see this Michael Keaton craziness. I was referring to the one film that Keaton has been announced as being in, not a set of his own Batman films. If I had info on him beyond “The Flash,” I would have obviously put it in my article.” However, like with all rumors, the seed has now been planted and it’s clear that fans are desperate for more Keaton.

Should the rumors of DeVito’s involvement turn out to be true, it’s possible that The Flash will be using various elements from the Burton-verse for the alternate reality that the Scarlet Speedster ends up in. Director Andy Muschietti has previously teased the scope of the movie saying that The Flash “will take you to a place where the DC Universe hasn’t gone before, so it’s very exciting.” Of course, the Burton-verse is somewhere that the DC universe has gone before, but not like this…

The Flash is scheduled for release on 4th November 2022. This comes to us from known scooper Daniel Richtman.