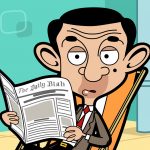 Rowan Atkinson, the British actor known the world over for his “Mr. Bean” character, has delivered a broadside against the so-called online “cancel culture.”

During an extensive interview with U.K. outlet Radio Times, Atkinson said: “The problem we have online is that an algorithm decides what we want to see, which ends up creating a simplistic, binary view of society. It becomes a case of either you’re with us or against us. And if you’re against us, you deserve to be ‘canceled.’

“It’s important that we’re exposed to a wide spectrum of opinion, but what we have now is the digital equivalent of the medieval mob roaming the streets looking for someone to burn,” Atkinson added. “So it is scary for anyone who’s a victim of that mob and it fills me with fear about the future.”

Elsewhere, describing his iconic Mr. Bean character, a global comic phenomenon transcending borders, language barriers and cultures that has spawned feature films, animated series and books, Atkinson said: “I don’t much enjoy playing him. The weight of responsibility is not pleasant. I find it stressful and exhausting, and I look forward to the end of it.”

Atkinson’s lack of enjoyment does not, however, preclude an animated film. “Having made an animated TV series, we’re now in the foothills of developing an animated movie for ‘Mr. Bean’ — it’s easier for me to perform the character vocally than visually,” Atkinson said.

However, the star didn’t rule out revisiting another seminal character of his, the scheming and caustic-witted Blackadder, the subject of four seasons and a Christmas special set in different eras, which was broadcast on the BBC between 1982 and 1989. Atkinson won the BAFTA for best light entertainment performance for “Blackadder Goes Forth” in 1989.

“I don’t actually like the process of making anything — with the possible exception of ‘Blackadder,’ because the responsibility for making that series funny was on many shoulders, not just mine,” Atkinson said. “But ‘Blackadder’ represented the creative energy we all had in the ’80s. To try to replicate that 30 years on wouldn’t be easy.”

Atkinson is also the face of the “Johnny English” (pictured) film franchise.

Next up for Atkinson is Netflix series “Man vs. Bee” where he plays a man at war with a bee while housesitting a luxurious mansion.