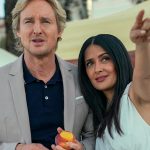 Did you know that Mike Cahill, the director behind 2011’s excellent indie feature film Another Earth, was making a new movie? And that it’s already finished? And coming to Amazon next month? I sure didn’t!

Owen Wilson (Midnight in Paris) and Salma Hayek (Beatriz at Dinner) star in Bliss, a science fiction romance which, like the rest of Cahill’s work, explores big, heady concepts from a grounded, human level. Check out the first Bliss trailer below.

This seems like the type of concept that could theoretically sustain an entire show – or at least a six-episode limited series. But Cahill chose to make it a movie, which means it should be absolutely packed with big ideas about reality and existence and identity. This is only his third movie, after 2011’s Another Earth, about a duplicate Earth heading toward ours, and 2014’s I Origins, about a form of reincarnation. He’s been working in TV since then, but I’m very excited that he has returned to the film world again.

Hayek is a cool choice for the female lead, bringing an intelligence and a sense of mystery that looks like it’ll keep us guessing about her true intentions all the way through. (And this trailer now has me picturing an alternate reality version of The Matrix, but with Hayek playing Morpheus). And I have nothing against Wilson’s goofy comedies, but as someone who appreciates the work he does when he’s able to stretch his dramatic wings a bit, it’s great to see him back in leading man mode here. And it’s especially fascinating that he’s playing a guy who seems to be traveling between dimensions or realities in this movie, because he will soon be appearing in the Disney+ series Loki and essentially playing a cop who travels through time. Personally, I can’t fathom why the idea of leaving our own time or reality is an attractive one to storytellers – everything seems to be going smoothly right now in the good ol’ U.S. of A!

Here is the movie’s official synopsis:

Bliss is a mind-bending love story following Greg (Owen Wilson) who, after recently being divorced and then fired, meets the mysterious Isabel (Salma Hayek), a woman living on the streets and convinced that the polluted, broken world around them is nothing but a computer simulation. Doubtful at first, Greg eventually discovers there may be some truth to Isabel’s wild conspiracy.