Netflix’s The Babysitter: Killer Queen Reviews Are In, See What Critics Are Saying 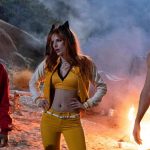 Netflix’s The Babysitter: Killer Queen Reviews Are In, See What Critics Are Saying

Netflix’s The Babysitter gave the horror-comedy world quite a surprise back in 2017. The over-the-top gorefest about a Satanic cult run by a boy’s babysitter garnered overall positive reviews from critics and audiences and continued to establish Samara Weaving as an actress to watch. That positive energy spawned a sequel in The Babysitter: Killer Queen, but the reviews are starting to come in and, well, overall they seem to be leaning negative.

First up is CinemaBlend’s own Mike Reyes’ who gave The Babysitter: Killer Queen a 4 out of 5, saying it knows what game its playing and gives plenty of “nods and winks to the history of follow ups.” It also sounds like it was the kind of sequel that learned from its past and made tweaks accordingly, making it a big improvement.

Sequels are a tough nut to crack, as any chance to revisit and expand a story presents the possibility of those taking on the task screwing it up. As if that wasn’t difficult enough, making a sequel to either a comedy or a horror movie is another tier of struggle, as those genres depend on the freshness of their gags and kills and can suffer from the repetition often found in follow-ups. With two strikes against it from the word go, director McG’s The Babysitter: Killer Queen might strike fear into fans and newcomers for all the wrong reasons. Yet in a feat of true demonic magic, this sophomore installment is harder, bloodier, faster, and funnier than the movie that started it all.

Another critic that was feeling what this horror sequel was putting down is Sam Stone from CBR. He thought it was even more enjoyable than the first, and said it knew what it was trying to be and upped the ante on the gore and mayhem. However, he admits if you’re not into that kind of thing, this might not be the movie for you.

If you’re not a fan of slasher movies and the graphic violence that goes with them, chances are you’re not going to be a fan of this movie either. However, the violence is almost always played for laughs; it’s purposefully meant to be as outrageous and deliriously gory as possible, but it’s never overly unsavory or realistic.

Next up is Brian Tallerico’s review on RogerEbert.com. He was not as kind to The Babysitter: Killer Queen and gave it a 1 out of 4 and describes it as a direct -to-TV sequel with the same director and most of the same cast, but with a “drop in quality.” It also suffers from delivering very dated jokes about “Ice Ice Baby” and the “MC Hammer Dance” and claiming, “My near-teen kid would have no idea what either of these things are.” He goes on to say,

No one expects The Babysitter: Killer Queen to be anything other than your basic escapist entertainment, but it fails even at this modest goal. It’s a defiantly stupid movie, with references so bizarrely dated that it verges on fascinating.

Meanwhile, Meagan Navarro’s review from Bloody Disgusting who gave it 2.5 out of 5. She says it follows the typical sequel track and “opts to go bigger and gorier” But along with that formula she added, “mostly, it just gets dumber. And it’s really, really dumb.” In the end, she says it’s trying too hard to “fine the pulse of modern teen culture.”

While the setup remains the same, in which Cole must survive the night against an onslaught of murderous Satanists, this sequel tries to carve out a separate identity through MTV-like irreverent, loud style. If you’ve ever stumbled upon a meme in which an AI bot penned a script after watching 1,000 hours of movies, well, Killer Queen feels a lot like that.

Molly Freeman of ScreenRant gave it a 2 out of 5 and found the horror sequel an uneven and contrived version of the original, complaining that, “the end result is a beginning and ending weighed down by delivering a lot of exposition and explanation” and that this only made it worse because “it largely distracts from the silly, bloody fun that made the original so entertaining.” In the end, she thinks they would have been better off not making it at all.

It’s not often Netflix releases sequels to its movies, and it may have been better if The Babysitter had been left without a follow-up. The Babysitter: Killer Queen is junk food entertainment at its most mediocre, delivering barely enough blood and fun without anything truly memorable.

And lastly, we have Jordan Hoffman from TV Guide, who was having none of this horror movie’s gory antics. He gave it a 1 out of 5 and didn’t find much about the movie that was redeemable and would rather go watch Cabin in the Woods instead, decrying the “Boring bloody mayhem” and thinking director McG could do much better, saying “while he’s never done anything I’d write home about, they are rarely this awful.”

Gory horror-comedies with half-baked plots can actually be quite entertaining if they are at least well-shot and well-written. This sequel to the borderline-decent 2017 Netflix original The Babysitter is neither of these things. It’s essentially a replay of the first, to the point that the action stops at one moment so the words ‘What The Fuck?!…. AGAIN?!?’ can appear on the screen. Embarrassing.

Of course, these are only a handful of reviews rushing in and there will be many more to hit the scene. But from the reviews presented here, you wouldn’t be blamed for having mixed feelings about The Babysitter: Killer Queen.

You can make your own determination of the movie right now, as it just landed on Netflix. And once you’re done, be sure to check out the other Netflix movies and TV shows coming soon in September.