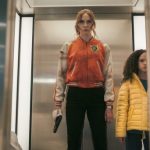 You only need to say the words “female assassin thriller starring Karen Gillan, Lena Headey, Michelle Yeoh, Angela Bassett, and Carla Gugino” for us to want to inject the movie into our veins immediately. Or, in the case of Gunpowder Milkshake, drink it all up. But we couldn’t ask for a more star-studded female assassin thriller, nor one that could travel more quickly to the top of our most anticipated lists. Get a much-needed sugar rush with the Gunpowder Milkshake first look photos below.

Karen Gillan has always been immensely watchable in the big-budget ensembles she’s starred in like Jumanji: Welcome to the Jungle and Guardians of the Galaxy, and now she gets to lead a star-studded ensemble with Gunpowder Milkshake. Gillan stars as Sam, an assassin raised by a ruthless crime syndicate after she was abandoned by her mother Scarlet (Lena Headey), a former elite assassin. But when a job involving an innocent 8-year-old girl (Chloe Coleman) goes wrong, Sam must turn to her mother and a deadly team known as the Librarians (Angela Bassett, Michelle Yeoh and Carla Gugino) for help.

Written by Navot Papushado & Ehud Lavski and directed by Papushado, Gunpowder Milkshake doesn’t need much of a pitch — it’s already got an all-star cast of women who could dominate the screen on their own. Combined, it’s almost intimidating to imagine what kind of effect Bassett, Yeoh, Gugino, and Headey could have. Though I’m a little skeptical of the premise centering around a kid — Coleman starred in the vaguely similar My Spy, which was a disposable family-friendly action comedy — which suggests that Gunpowder Milkshake will veer toward the comedy side too. But with a cast like this, Gunpowder Milkshake is high on the menu of our most anticipated movies.

Here is the synopsis for Gunpowder Milkshake:

Sam (Karen Gillan) was only 12 years old when her mother Scarlet (Lena Headey), an elite assassin, was forced to abandon her. Sam was raised by The Firm, the ruthless crime syndicate her mother worked for. Now, 15 years later, Sam has followed in her mother’s footsteps and grown into a fierce hit-woman. She uses her “talents” to clean up The Firm’s most dangerous messes. She’s as efficient as she is loyal.

But when a high-risk job goes wrong, Sam must choose between serving The Firm and protecting the life of an innocent 8-year-old girl – Emily (Chloe Coleman). With a target on her back, Sam has only one chance to survive: Reunite with her mother and her lethal associates: The Librarians (Angela Bassett, Michelle Yeoh and Carla Gugino).

These three generations of women must now learn to trust each other, stand up to The Firm and their army of henchmen, and raise hell against those who could take everything from them.