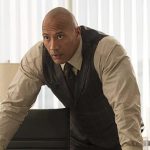 Although we’ve gone through nearly all of 2020 without seeing Dwayne Johnson in a new project, that doesn’t mean The Rock hasn’t been keeping busy. Among the things he’s working on is the upcoming Netflix movie Red Notice, thus marking his first collaboration with the streaming service. As Red Notice is wrapping up filming, Johnson has shared a photo from the set of him looking ultra stylish.

Dwayne Johnson is certainly no stranger to looking dapper on camera, particularly from his time on the HBO series Ballers. So it should come as no surprise that Red Notice will also see Johnson appearing quite fashionable for some, if not all of the movie. Take a look at the Hollywood star showing off his cool duds:

Between that snazzy jacket and the sleek Porsche he’s leaning against, Dwayne Johnson looks like the epitome of cool in this picture he shared on Instagram. In addition to starring in Red Notice, Johnson is also producing the movie through his Seven Bucks Production company. So while these clothes make him look good as his character, the bonus is that he also appears more boss-like behind the scenes.

Dwayne Johnson’s latest movie has him playing an INTERPOL agent who’s been tasked with tracking down and apprehending the world’s most wanted art thief. Wonder Woman 1984’s Gal Gadot is playing said art thief, while Ryan Reynolds, who worked with Johnson last year on Hobbs & Shaw, will play the world’s greatest con-man. Red Notice marks Johnson’s third time collaborating with director Rawson Marshall Thurber, with the two of them having previously worked together on Central Intelligence and Skyscraper.

Red Notice was originally going to be released theatrically in 2020 by Universal Pictures, but Netflix acquired the feature in July 2019. There’s still no word on when Red Notice will drop on the streaming service, as the pandemic interfered with its progress. Red Notice began filming at the start of January, but once movie and TV productions started shutting down left and right in March, the cast and crew of the Netflix movie weren’t able to resume work until mid-September.