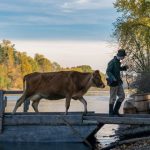 The cinema channel “Cinema” has brought together all the lists of the best films of the year and made from them “The absolute rating of the winners”. The rating of the best films of 2020 is based on data collected from 19 resources about cinema, including Empire, Rotten Tomatoes, Indiewire, Vanity Fair, Entertainment Weekly, The New York Times, Metacritic.com, The Hollywood Reporter, Variety, UAIS and dr.

In the process of drawing up the top 10, ratings from viewers, box office fees and opinions of film critics were taken into account. So, on the first line was the drama “The First Cow” by Kelly Reichardt, which premiered at the Berlin Film Festival. It is followed by the crime comedy “Gentlemen” by Guy Ritchie, and the third place went to “Land of the Nomads” by Chloe Zhao.

The ranking of the top ten films is as follows: