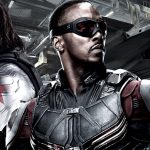 The Marvel Cinematic Universe has been slapped with a series of delays in recent months, in part due to cinemas shutting doors. The biggest delay thus far has been Black Widow, which was shunted from its mid-2020 release date all the way until late November.

The Falcon & The Winter Soldier looks to be joining the Scarlett Johansson-led feature flick in a hefty delay now too. According to Disney insider Christopher Marc, the Captain America follow-up has been pushed back until “at least” 2021.

This lines up with previous news the Disney Plus series, which was set to kick-off the MCU’s new TV offerings post-Endgame, was in significant danger of missing its penned-in August release slot on the Disney streaming service.

The Falcon and The Winter Soldier cast members have also been summoned back to the set for additional shoots in recent weeks. That includes leading cast members Anthony Mackie (Sam Wilson) and Sebastian Stan (Bucky Barnes).

Marvel Studios The Falcon and The Winter Soldier was originally set to debut on Disney Plus in August.

This reported delay, which has yet to be officially confirmed by Disney, may see WandaVision jump the premiere queue into the original The Falcon and The Winter Soldier release date.The far more mystical WandaVision series is focused around Scarlet Witch and The Vision, and will lead into Doctor Strange sequel. Disney’s Bob Chapek has assured fans the Marvel show will still arrive “shortly,” and is “ready to go.”

Marvel Studios WandaVision may jump the Disney Plus queue after new The Falcon and The Winter Soldier delays.

Disney has also confirmed The Mandalorian, which is preparing to air its second season later this year, is “on track” for release. The highly-anticipated Star Wars show’s return will likely be the final tent-pole release for Disney Plus this year.

The second season is also being tipped to spawn multiple Star Wars spinoffs heading into the future, including shows for Ahsoka and Boba Fett. Sequel trilogy villain Kylo Ren is also reportedly in line for his own prequel series too.

On the Marvel front, there’s plenty more Disney Plus series planned for 2021-2022 too. Ms. Marvel, Hawkeye’s spinoff show, the Kit Harrington-led Moon Knight series, She-Hulk, and of course Loki are all in various stages of production at the moment.For now, though, Captain America fans may have a bit of a wait before they get to see their new duo in-action.
Source