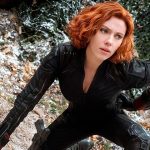 Scarlett Johansson is “eager” for Marvel’s Black Widow to be released after it delayed by Disney as a result of the COVID-19 pandemic.

The superhero blockbuster, which features Florence Pugh making her debut as elite spy Yelena Belova, has moved seven months, from this November to 7th May 2021.

Johansson and Pugh appear on the cover of Marie Claire‘s Winter 2020 issue, which shared a new image of their characters Natasha Romanoff aka Black Widow, and assassin Belova riding on a motorbike.

“We’re all eager to get the movie out, but more important than anything, everybody wants the experience to feel safe, to have people be able to really feel confident about sitting in an enclosed theatre,” Johansson told the publication

Little Women star Pugh, who plays Romanoff’s fellow Red Room trainee, revealed she wasn’t surprised that the release date was pushed back, and that people’s safety is paramount at the moment,

“I think I probably had a hunch,” she said. “It seemed to me all the fun of summer, and everybody being outside and finally having some relaxed rules, caught up with everyone, obviously, because of the virus. I’m sad that people don’t get to watch it for another half year, but I wasn’t majorly upset because it’s important to look after people right now.”

Directed by Cate Shortland and set before Avengers: Endgame, the much-anticipated blockbuster will explore Black Widow’s origin in Russia and see her reunite with her family.

In the trailers released so far, Natasha talks about how she’s going to confront her past and that involves a trip to Russia, where she grew up and learned her fighting skills.

Johansson recently described Black Widow as a “family drama” in an interview with Total Film.“I think part of Kevin Feige’s genius is that he always thinks about what fans expect out of these films and then gives them something that they never could’ve dreamed of,” she said. “The idea of Natasha Romanoff in a family drama is the least expected thing, and I had to wrap my head around what that was going to be because there’s such a big tonal shift.”