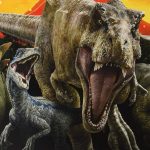 Colin Trevorrow explains how he tried to make Jurassic World: Dominion feel like the conclusion to a larger story.

Jurassic World 3 is going to feel like the culmination of the entire franchise according to director Colin Trevorrow. The upcoming sequel, officially titled Jurassic World: Dominion, wrapped filming late last year, becoming one of the first major blockbusters to complete production following the massive Hollywood shutdown in 2020. Now, Trevorrow is hyping up the sequel as the completion of a much larger story.

Colin Trevorrow is currently promoting the release of Jurassic World: Camp Cretaceous season 2, which hits Netflix on Friday. During a recent interview, the filmmaker, who previously directed 2015’s Jurassic World, was asked about Dominion. While he couldn’t get too far into specifics, he explained that the goal was to tie all six movies together. Here’s what he had to say about it.

Speaking further, Colin Trevorrow also called the movie “a celebration of the whole franchise.” It has seemed for quite some time like JW3 was building to something big and climactic. Chris Pratt, who returns as Owen Grady, once likened it to Avengers: Endgame saying “everyone” is in it. That seems to be true as original cast members Sam Neill (Alan Grant), Jeff Goldblum (Ian Malcolm) and Laura Dern (Ellie Sattler) are all set to appear together for the first time since 1993’s Jurassic Park. Trevorrow has promised multiple times that they will have significant roles.

The cast also includes Daniella Pineda, Scott Haze, Campbell Scott, Justice Smith, Omar Sy, DeWanda Wise, Dichen Lachman, BD Wong and Mamoudou Athie. Bryce Dallas Howard is also returning as Claire Dearing. Scott will be playing the character of Lewis Dodgson, who was last seen in the opening act of Jurassic Park, again signaling that everything will be tied together in the upcoming installment.

Emily Carmichael wrote the screenplay alongside Colin Trevorrow. Originally, the movie was supposed to be released this year but due to production delays and uncertainty at the box office, it was pushed back a year. Jurassic World: Dominion is currently set to arrive on June 10, 2022. We’ll be sure to keep you posted as further details are made available. This news comes to us via Entertainment Weekly.