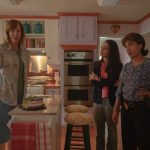 Something big is happening three hours north of San Francisco, and it involves Mila Kunis, Allison Janney and Awkwafina.

The first trailer just dropped for “Breaking News in Yuba County,” a full-length comedy premiering in select theatres and digitally on February 12 (the specific streaming platform has yet to be announced). Directed by Tate Taylor (“Ma,” “The Help”), the film follows Allison Janney (“I, Tonya”) as a housewife whose husband disappears, leading to fifteen minutes of fame which she goes to great lengths to extend (spoiler alert: it appears he may have disappeared due to entirely natural causes).

Kunis plays a news reporter who breaks the story, then gets entangled in Janney’s plot. Awkwafina appears as some type of criminal, although it’s unclear her motives beyond a desire for Wanda Sykes (“Black-ish”) to not point a gun at her vagina, which you can see in the trailer (the gun-pointing, not her private parts).