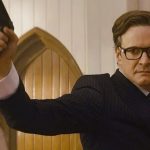 Deadline is reporting that Colin Firth is set to star in STXfilms and Tencent Pictures’ big screen adaptation of the hit Chinese digital comic Zombie Brother, which is tentatively going by the title New York Will Eat You Alive.

Having attracted over 28 billion views since its launch in 2011 on Tencent’s digital comics platform, Zombie Brother tells the story of an ordinary guy looking to escape his city with his girlfriend when the population start turning into zombies due to contaminated water. The comic has also spawned an animated series and stage adaptation.

“We always wanted to cast this in a way that would give life to the source material and elevate the action and you can’t achieve that goal any better than hiring Colin Firth,” said STXfilms chairman Adam Fogelson. “From The King’s Speech to Kingsman, Colin always gives an Oscar-caliber performance. We’re thrilled to be reuniting with him on New York Will Eat You Alive in a role that will allow him to have fun while showcasing his deadpan humor and comic timing.”

The Zombie Brother adaptation has been in development for several years now, with Firth’s Kingsman: The Golden Circle co-star Channing Tatum producing through his Free Association outfit and Todd Strauss-Schulson (Isn’t It Romantic) on board to direct.