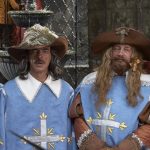 Now in pre-production, the pair of films will shoot simultaneously at the end of this summer in France. Germany’s Constantin Film and Spain’s DeAPlaneta have come on board to co-produce and have already acquired rights for Germany and Spain.

This marks the most ambitious film project announced in France, if not in Europe (excluding the U.K.), since the start of the pandemic.

Pathé will release theatrically in France and handle the foreign sales. The movie has been pre-bought by M6, OCS and Canal Plus. M6 will also be co-producing.

The cast for other roles, such as Richelieu, will be unveiled in the coming weeks. The adaptation will also introduce a new character, Hannibal, based on the true story of Louis Anniaba, the first Black musketeer in French history.

Rassam, the CEO of Chapter 2, a Mediawan company, said he has “always dreamed of bringing ‘The Three Musketeers’ to the big screen and there is no better partner than Pathé to embark on this adventure.”

“We feel a great deal of responsibility to protect the work of Dumas whilst offering an authentic and exciting cinematic saga for today’s audiences,” said Rassam, who is one of France’s top producers with credits ranging from the BAFTA-winning animated feature “The Little Prince,” to French hits such as “Le Prenom,” and Benjamin Millepied’s feature debut “Carmen,” which is shooting in Australia.

Rassam said that the project will base all characters on existing historical figures like Dumas did, and will also be including new characters such as Hannibal to enrich Dumas’ “extraordinary” canvas in an organic way.

With movie theaters currently closed in France, Pathé Films’ CEO Ardavan Safaee said the company strongly believes that “audiences will crave stories that are eventful and adventurous” in a “new post-pandemic world.”

Safaee also said the French studio was an ideal home for the project, “100 years after Pathé’s first production of a ‘Three Musketeers’ movie.”

“We are thrilled to launch, for the third time in our history, the adaptation of one of the most iconic piece of French literature with an incredible creative team and longstanding partners who gathered as our own musketeers!”

Bourboulon said “adapting Dumas’s rich work in this day and age has never been more relevant and the desire for a big show on the big screen has never been stronger.”

“Following ‘Eiffel’ (Pathé’s biopic of Gustave Eiffel which he recently completed), this project is part of an obvious artistic continuity coupled with the pleasure to join forces again with a group of trusted authors and producers for this new adventure,” said the helmer, who added that the cast will bring modernity to this adaptation and the “promise of a great cinema event.”

Delaporte and De La Patelliere said their ambition was to “channel Dumas, to write films with a sense of adventure, panache and suspense but also dialogues worthy of Cyrano.”

“What struck us was how modern the characters and the themes were in Dumas’ work. Society’s violence, the place of women, religious wars … It is with that in mind that we approached our adaptation,” said the pair.

Martin Moszkowicz, the executive chairman at Constantin Film, said the company was “very proud to be part of this sterling group of extraordinary talent for this outstanding project, that takes one of the greatest stories ever told back to its roots in France.”

Ignacio Segura, the general manager at DeAPlaneta, said that as “co-producers (DeAPlaneta) looks for stories like this, with great international appeal, big production values and beloved characters that resonate with audiences all over the world.”

“We can’t wait to unveil the epic adventures of these iconic characters not only on their great movie theater experience, but on the many different transmedia storytelling that this large new franchise has to offer,” said Segura.

Pathe’s slate includes “Coda,” which opened Sundance and landed a record-breaking deal with Apple, and the company is in pre-production on “Asterix & Obelix: The Silk Road,” another big-budget French movie expected to shoot later this year.