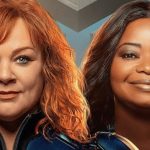 Spend your Spring Break with Melissa McCarthy and Octavia Spencer when Netflix unleashes the new superhero comedy Thunder Force on April 9. The comedic duo are gaining special powers and protecting their city in a high flying adventure from director Ben Falcone. Today, we have a first look at Thunder Force with the first trailer and new poster, which shows superhero friends Lydia and Emily suited up and ready for action.

Thunder Force comes from the husband and wife team of Melissa McCarthy and Ben Falcone, with Falcone writing the screenplay himself this time out. The pair most recently worked together on Superintelligence, which premiered last November on HBO Max. Together, they have also collaborated on the comedies Life of the Party, The Boss and Tammy. Now, they are taking on the hugely popular superhero genre with a comic book movie like no other before it.

Melissa McCarthy and Octavia Spencer previously worked together on Superintelligence, where Spencer provided one of the voices in the movie. They have also both appeared in the 2007 mystery fantasy The Nines as well as the 2008 comedy drama Pretty Ugly People. Thunder Force serves as the first time that the two actresses have teamed up as the leads.

Thunder Force is one of the big new releases coming to Netflix in 2021. It will arrive just in time for Spring Break, and is one of the centerpieces for Netflix’s April line-up. The movie was completed before lockdown last March. Since then, Melissa McCarthy has moved onto shooting a small role in Marvel’s upcoming sequel Thor: Love and Thunder, where she will play an actress taking on the role of Hela. She is also currently filming the Disney remake The Little Mermaid, where she will play the live-action incarnation of villain Ursula.