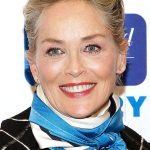 Sharon Stone opened up in her new memoir The Beauty of Living Twice about the challenging experiences she’s had throughout her career.

Filming her breakout role in Basic Instinct was especially difficult for the actress.

Stone, 63, said in an excerpt of her memoir obtained by Vanity Fair that a member of the Basic Instinct production told her to take her underwear off during the infamous cross-legged scene under the pretense that her private area would not be visible on film.

The actress said she was called to see the final finish of the movie “with a room full of agents and lawyers, most of whom had nothing to do with the project.”

“That was how I saw my vagina-shot for the first time, long after I’d been told, ‘We can’t see anything—I just need you to remove your panties, as the white is reflecting the light, so we know you have panties on,’ ” she wrote. “Yes, there have been many points of view on this topic, but since I’m the one with the vagina, in question, let me say: The other points of view are bulls–. … It was me and my parts up there.”

After the viewing, Stone said she slapped director “Paul [Verhoeven] across the face, left, went to my car, and called my lawyer, Marty Singer.”

Singer reportedly informed Stone that the movie could not be made, according to the Screen Actors Guild. “It wasn’t legal to shoot up my dress in this fashion,” she learned.

“I let Paul know of the options Marty had laid out for me. Of course, he vehemently denied that I had any choices at all. I was just an actress, just a woman; what choices could I have?” she recalled. “But I did have choices. So I thought and thought and I chose to allow this scene in the film. Why? Because it was correct for the film and for the character; and because, after all, I did it.”

The Casino actress said she felt the need “to become objective” as to why she was tricked into removing her underwear considering she worked so hard to get the part and “only this director had stood up for me.”

A rep for Verhoeven had no comment when reached out to by PEOPLE.

“I can say that the role was by far the most stretching that I had ever done in terms of considering the dark side of myself,” she admitted. “It was terrifying. I had walked in my sleep three times during production, twice waking fully dressed in my car in my garage. I had hideous nightmares.”

“Do you have any idea how many people have watched Basic Instinct in the last 20-something years? Think about it. It’s about more than just a peek up my skirt, people,” she added.

Stone also opened up about other instances when she dealt with predatory behavior on set.

One year, she said, a director would constantly demand that she sat on his lap when he was giving instruction.

“This #MeToo candidate called me in to work every day for weeks, when Laird was a brand-new baby, and had me go through the works—hair, makeup, and wardrobe—and then wouldn’t shoot with me because I refused to sit in his lap and take direction,” the actress wrote. “Of course the film was a bomb. The level of insecurity and unprofessionalism, and I would guess drug abuse, required to make those kinds of choices never leads to good work.”

Another producer, she said, “explained to me why I should f— my costar so that we could have onscreen chemistry.”

“You guys insisted on this actor when he couldn’t get one whole scene out in the test.… Now you think if I f— him, he will become a fine actor? Nobody’s that good in bed,” Stone said.

That wasn’t the first time a director or producer asked her to do that either, she revealed in the memoir.

Stone added, “Sex, not just sexuality onscreen, has long been expected in my business.”