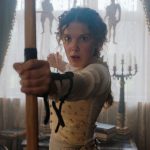 Sir Arthur Conan Doyle’s estate and the creators of Netflix movie Enola Holmes have agreed to dismiss a copyright lawsuit over Sherlock Holmes’ emotions. Copyright Lately reported on the outcome today, noting that the court didn’t rule on the merits of the case, possibly indicating that the parties settled. So unfortunately, we don’t know if Enola Holmes’ take on Doyle’s famous detective violated copyright by showing a wider range of feelings and greater respect for women.

The Enola Holmes case hinged on Sherlock Holmes’ complicated copyright status. Most Holmes stories sit in the public domain, and stories like Enola Holmes — which reimagines Holmes (played by Henry Cavill) having a younger sister — can freely repurpose their elements. But 10 of Arthur Conan Doyle’s stories are still protected by copyright, and the Doyle estate argued that they depict a meaningfully different version of the character. (He’s more caring, less overtly contemptuous of women and friendship, and generally less of a jerk.)

Doyle’s estate claimed that Enola Holmes unlawfully used this copyrighted version of Holmes. And it sued author Nancy Springer, who wrote the original Enola Holmes series of books, along with Netflix, Springer’s publisher, and the film adaptation’s production company. The lawsuit’s defendants argued that Doyle’s estate was trying to copyright “generic concepts like warmth, kindness, empathy, or respect” — rather than any specific plot or character elements contained in those stories.

This lawsuit has revived a complicated legal debate over Sherlock Holmes. But the detective likely won’t be under copyright much longer: Doyle’s final stories are set to fall into the public domain in 2022 and 2023.