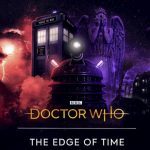 Maze Theory have revealed a new trilogy of games for 2021, expanding on the success of The Edge of Time

At today’s Doctor Who/Maze Theory panel at the online New York Comic Con/Metaverse convention, three exciting new games were announced. The team will be building on their previous success with the Doctor Who: The Edge of Time VR game. And in Spring 2021 they’ll be expanding into the worlds of mobile and console games. From Osgood battling the Weeping Angels in The Lonely Assassins, to two Doctors joining forces in Edge of Time sequel Edge of Reality, and the Time Lord Victorious coming to Edge of Time, it’s going to be a bumper year for Doctor Who gaming.

The details of the Time Lord Victorious expansion to The Edge of Time VR game are mostly under wraps. However, it does appear the new update will feature characters, situations and plot elements introduced in the multimedia epic. Could we looking at a virtual reality visit to the Dark Times perhaps? Or maybe appearances by the likes of Brian the Ood and the Kotturah? Time will tell…

The new story has you recruited by the Thirteenth Doctor to save the universe once again. This time you must uncover a universe-spanning threat as you seek to save reality from a series of time-breaking glitches. The Edge of Reality not only continues the story that began in The Edge of Time but sees you partner with the Doctor to unearth a greater mystery. Along the way, you’ll come face-to-face with classic Doctor Who monsters including the Daleks and Weeping Angels. Experience the metal-clad terror of the Cybermen, Ice Warriors and more foes yet to be revealed. But what is the Chaosverse? And how can you save reality itself from it?

Also revealed today was Doctor Who: The Lonely Assassins, coming to iOS and Android mobile devices as well as Nintendo Switch. The game is being developed by award-winning Malaysian studio Kaigan Games, renowned for pushing the boundaries of storytelling within mobile.

The game will see players uncover and decipher a ‘found phone’ mystery. Can you get to the bottom of a sinister series of events taking place at Wester Drumlins? The adventure brings you back to the iconic house featured in the legendary Doctor Who episode Blink. Along the way you’ll discover someone is missing and that a menacing new nemesis has emerged. Team up with Osgood (Ingrid Oliver) and other classic characters as you get steadily closer to the truth. Including, unless Blogtor Who’s eyes are mistaken, Larry Nightingale (Finlay Robertson) from Blink!

Taking about the games Maze Theory’s CEO, Ian Hambleton, explained “With our partners at BBC Studios, we are expanding the Doctor Who universe through a ground-breaking trilogy of experiences, now delivered across multiple devices and platforms.

“The uniting of The Thirteenth Doctor and The Tenth in Doctor Who: The Edge of Reality is set to be an epic moment in a game that completely re-imagines last year’s VR experience.

“While The Lonely Assassins tells a brand new story exploring the legend of one of the most iconic episodes ever. As part of Doctor Who: Time Lord Victorious, we have also delivered an amazing fan-centric update to the VR game Doctor Who: The Edge of Time.

“These launches reaffirm the studio’s commitment to take players on exciting and unexpected narrative journeys.”

BBC Studios’ Senior Producer for Games & Interactive, Kevin Jorge added, “The Edge of Reality and The Lonely Assassins bring Doctor Who to life on console and mobile in a new and thrilling way. From saving the universe with the Thirteenth and Tenth Doctors, to bringing back the Weeping Angels, it’s going to be an exciting year and we can’t wait to reveal more!”