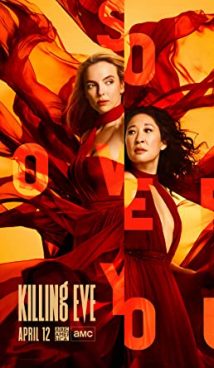 The intriguing story of Villanelle, an international assassin, and Eve Polastri, a MI5 analyst, continues. After the shocking season finale twist ending, the two women drift apart, trying to go their own separate ways, however, the main theme of this season can be described as ‘Obsession never dies.’ Eve and Villanelle will meet again, and as they go through funny and tragic events together, they will uncover more secrets of the mysterios The Twelve organization, simultaneously dwelling deep in their own feelings. More black humor, luxurious interiors, and mind-boggling adventures are to come with the characters of Sandra Oh and Jodie Comer leading the way.

This series was created by Phoebe Waller-Bridge, one of the most successful British scriptwriters

A British-American thriller television series based on the novel by Luke Jennings.

The first season of ‘Killing Eve’ was premiered on April 8, 2018 on BBC America. Since then, the show has earned critical acclaim and has been enjoying high ratings, which led to further seasons.

Yes. ‘Killing Eve’ has already been renewed for a fourth season.