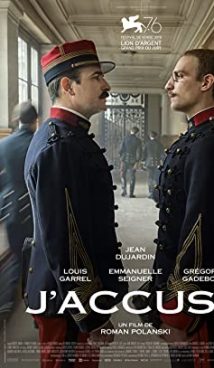 An Officer and a Spy

If you are tired of endless TV-shows and silly blockbusters, “An Officer and a Spy” is the film just for you.

The movie tells a true story of when, at the end of the 19th century, Captain Alfred Dreyfus, an employee of the French General Staff, was accused of high treason. All Europe learns about this case, and the chief of counterintelligence, Colonel Picquart, begins to suspect that the case was fabricated. The case of Alfred Dreyfus splits the French society, and Picquart decides to find out the truth at all costs.

– The film is based on the novel of the same name by the English writer Robert Harris. This is not the first time Roman Polanski works with this author — he directed the screen adaptation of “The Ghost Writer,” a political thriller with Ewan McGregor and Pierce Brosnan. There was another film in production — “Pompeii,” a detective story in an ancient Roman setting — but it was halted due to a writers’ strike.

– The original title “J’accuse” of both the movie and the novel translates into English as “I blame.” It was the name of the article written by Émile Zola for the French newspaper “L’Aurore.” There the writer points out angrily the prejudice in the Dreyfus case. It was addressed firstly to the French President Foru.

– The actor Jean Dujardin, who played the leading role, is known in the world mainly for the sensational film “The Artist,” for which he got the Golden Globe. In total, this film received 5 valued prizes in 2012.

This is a French-Italian-made historical thriller based on the novel of the same name by Robert Harris.

The world premiere took place on August 30, 2019 at the Venice Film Festival.

The world premiere of the film “An Officer and a Spy” took place on August 30, 2019 at the Venice Film Festival. It was released internationally in November 2019.

The film director, Roman Polanski, got 4 awards at the Venice Film Festival. “An Officer and a Spy” also received three César awards.