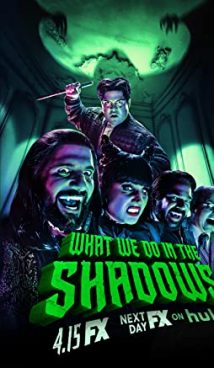 What We Do in the Shadows

The theme of vampires has no pauses in movies and on TV. From the time of silent cinema to the era of millions of blockbusters, producers and directors concoct new stories about ghouls, but most of them do not deserve our attention. However, this does not relate to the New Zealander Taika Waititi, who managed to release a very inexpensive black comedy named What We Do in the Shadows in 2014. Waititi got to the Academy Awards and Hollywood, and five years later we got a remake in the form of a series.

What We Do in the Shadows is a pseudo-documentary immersion in the life of bloodsuckers living in the same house. We can see here characters as follows: the former Janissary, the gypsy, and the original vampire. They have to somehow get along with their neighbors as well as with the surrounding normal world.

The series preserves the spirit of the popular full-length original film expanding the universe, and still remains hilarious.

The American-made TV series is based on the black comedy movie What We Do in the Shadows.

The second season premiered on April 15, 2020 on the FX channel.

The creators of the series are still keeping silent about a possible extension.