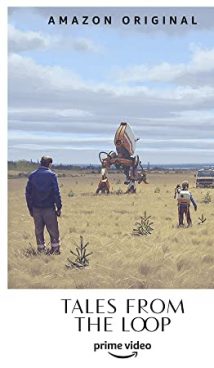 Tales from the Loop

This series is a collection of a number of mysterious stories taking place in a small town in Ohio. This small community is home to the Center for Experimental Physics, called by local townspeople ‘The Loop.’

Robots, time travels, body-swaps, levitating cars – all of this should amaze and surprise the citizens, but for them, all of this is just daily life. As all normal people, they fall in love, go to work, grow up, die… Each episode of this collection of stories replaces a familiar element of life with a fantastic and uncommon aspect, thus giving us an opportunity to look at ourselves from a different perspective. The authors created a very attractive world with a twist of retro futurism. Here, droids walk, tractors fly, and no laptops or smartphones can be found. The atmosphere in the series is very meditative and pensieve. Sometimes, the water that streams in the springtime creeks or snow turning blue at dusk in January seem more important to the viewers than the functions of another robot.

An American sci-fi television series based on the art books by Simon Stalenhag.

Stålenhag is one of the scriptwriters and producers of this series.