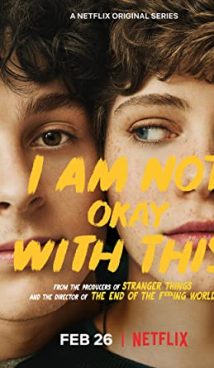 I Am Not Okay with This

Sydney Novak (Sophia Lillis) is the ordinary high school student from a small American town. She rails against her mother, fights with her best friend’s boyfriend, pops zits and tries dealing with her libido. Someday something supernatural wakes up in this girl. Sydney realizes that she can move objects. At first she thinks that this is an awkward age; but then she discovers that her father, having committed suicide, could also have done so.

Attempts to understand what is happening to her lead to bloody consequences.

The American-made TV series is based on the similarly-named graphic novel by Charles Forsman and shot in the fantastic comedy genre.

The first season premiered on February 26, 2020 on the Netflix platform.

All episodes of the first season are available from February 26, 2020.

Netflix cancelled the show after the first season.

The End of the F***ing World