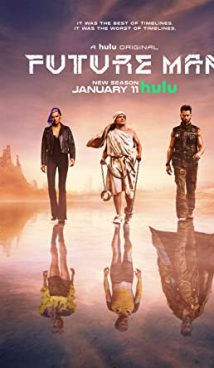 Josh Futturman (Josh Hutcherson) is your typical loser that lives with his parents and works as a janitor in a research centre. He spends all his free time playing video games in his room. One day successfully completes his favorite game Bionic Wars , when suddenly its main characters appear in front of him, tell him that the game was simply a test, and recruit Josh to save the world.

What awaits Josh now is adventures while travelling through time, an unknown post-apocalyptic world of the future, peaceful past to miss, and a lot of indecent humour. This series features bawdy jokes, so to enjoy Future Man, you will need to let go of your shame. as this is a truly

An American television series in the genre of science fiction/comedy.

Season 3 was premiered on April 3 on Hulu Channel.

No. It was officially announced that the third season would be the last season of the series.