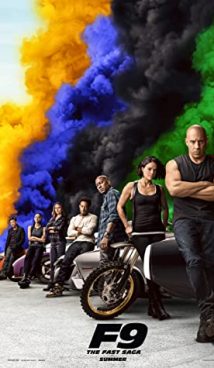 Dominic Toretto (Vin Diesel) is enjoying a quiet life with his wife and their son when suddenly it is interrupted by the arrival of Dominic’s younger brother Jacob (John Cena), a deadly assassin who holds a personal vendetta against him. While trying to figure out his way through this, Dominic is approached by his old enemy Cipher (Charlize Theron) offering her help. Should he trust Cipher, or is he treading on dangerous ground?

F9 is an American action film scheduled to release worldwide on April 1, 2021.
Please visit our website to watch F9 trailer online and check out interesting film trivia and a release date. No signup required.

– When will the film have its world premiere?
After yet another delay, F9 is finally set to launch globally on April 1, 2021.
– Where was F9 shot?
Apart from the US, UK and Thailand, the film was shot in Tbilisi, with high-octane races taking place on Freedom Square, Pushkin Street and Rustaveli Avenue.