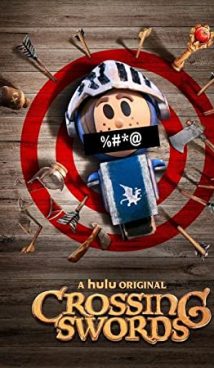 In the center of the animated series Crossing Swords’ plot is the peasant Patrick, who, by the will of fate, becomes a squire and goes to serve in the royal castle. The young idealist is shocked by the situation in the monarchs’ nest, but he cannot return to his home because of his greedy relatives who commit all sorts of criminal affairs. Patrick has to find himself and take his place in this puppet kingdom.

Deliberately done in a very primitive manner, Swords Crossed is full of bawdy jokes, obscene language, and references to the modern culture.

This is an American-made comedy animated series.

The premiere of the first season took place on June 13, 2020 on the Hulu channel.

Yes. The producers renewed the animated series for its second season right after the first one came out.