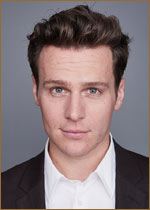 American actor, singer. Born in Lancaster (USA) in the family of a teacher and equestrian coach. After graduation, he dreamed of going to Carnegie Mellon University, but put off his studies in order to work in the theater. In 2005 he made his debut on Broadway. In 2007, the actor's debut on television took place - Henry Makler in several episodes of the soap opera One Life to Live. The popularity of the actor brought the role of Jesse James in the popular TV series "Losers" (2009-2015). In 2013, he voiced Kristoff in the animated film Frozen. In 2016, he won a Grammy Award in the Best Theatrical Musical Album category for his work on the production of Hamilton, where he played King George III. He is also known to many viewers as the performer of the role of FBI agent Holden Ford in the David Fincher series Mindhunter (2017-2019).