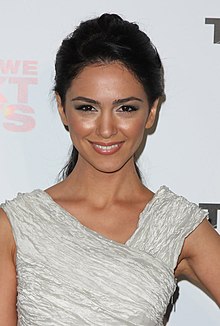 Nazanin Boniadi is a British actress and activist. Born in Iran and raised in London, she went to university in the United States, where she landed her first major acting role as Leyla Mir in the medical drama General Hospital (2007–2009) and its spin-off General Hospital: Night Shift (2007). Since then, she is best known for playing Nora in the CBS sitcom How I Met Your Mother (2011), Fara Sherazi in the Showtime spy thriller series Homeland (2013–2014), Esther in the historical drama film Ben-Hur (2016), Clare Quayle in the Starz sci-fi thriller series Counterpart (2017–2018), Zahra Kashani in the action thriller film Hotel Mumbai (2018), and Bronwyn in the Prime Video fantasy series The Lord of the Rings: The Rings of Power (2022–present).