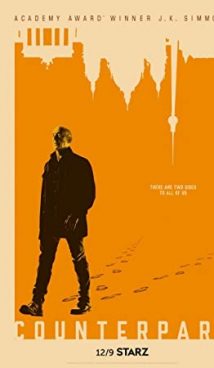 Once, in 1987, as a result of a scientific experiment conducted by a scientist Yanek in East Germany, a strange thing happened – our world split into two, and now there are two parallel realities, each of which have chosen its own path. To maintain communication between the two worlds, there is a kind of portal through which representatives of the two sides organize diplomacy and exchange ambassadors. Meanwhile, a monstrous flu epidemic hit one of the worlds. Since then, the fates of these two realities diverge further and further.  In addition, the world affected by the epidemic suspects that the second world is its cause.

Howard Silk, a UN officer in Berlin, is the protagonist of the TV show. Soon, Silk learns not only about the divided worlds, but also about the existence of his counterpart, which is a tough and cold-blooded agent from a parallel reality. Soon, both main characters will be embroiled in an incredible maelstrom of diplomacy, espionage and assassination.

Counterpart is an American-made fantasy thriller television series. Season 1 of the TV show premiered on December 10, 2017 on Starz TV.