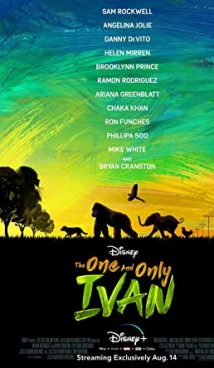 The One and Only Ivan

A touching and sometimes tragic story of a gorilla named Ivan unfolds before us. He was born in the jungle but was separated from his family. Now Ivan lives in a large shopping mall, where he became the star of his show for visitors. He has animal friends and considers Mack, the owner of the center, his family. One day Ivan gets his hands on a crayon and begins to draw, discovering the talents that were dormant before.

However, is it okay for a gorilla, even a good artist, to live in a mall? And a big black head of his comes with a plan…

– “The One and Only Ivan” is the movie that should be watched in the original voiceover as many amazing actors gave their voices to animals. For example, Ivan speaks with the voice of Sam Rockwell, Angelina Jolie is Stella, the elephant, Denny de Vito is Bob, the dog, and the famous singer Chaka Khan is Henrietta, the chicken.

– The movie is based on the book of the same name by Katherine Applegate, which, in turn, is based on the real story of Ivan, the gorilla, who lived in captivity for 27 years. After living in a shopping center, the real Ivan was admitted to the Atlanta Zoo, where he died in 2012 at the respectable age of 50.

– Initially, “The One and Only Ivan” was supposed to be shown in cinemas, but due to the coronavirus pandemic, the premiere will take place on the Disney+ platform.

This is an American-made family movie based on the book of the same name by Katherine Applegate.

The world premiere will take place on August 14, 2020 on the Disney+ streaming platform.

– When will the film premiere in the world?

“The One and Only Ivan” was filmed for the Disney+ service and will be available for watching on August 14, 2020.