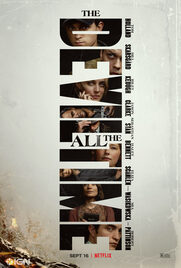 The Devil All the Time

The Devil All the Time shows a small town in Ohio. The lull between World War II and the Vietnam War becomes a stressful time when people begin to show their darker sides. Arvin (Tom Holland), the main character in the film, at his every step is faced with the terrible manifestations of the destructive behavior of the people around. The tragic fate of his parents, a corrupt sheriff, a dangerous priest and a couple of serial killers – all this becomes a difficult test of strength for Arvin. At some point, the viewer even doubts whether the main character will be able to overcome all these trials that his fate threw him.

The Devil All the Time is an American-made film, the adaptation of the psychological thriller novel of the same name by Donald Ray Pollock. The world premiere of the “The Devil Forever” will take place on September 16, 2020 on the Netflix streaming service.