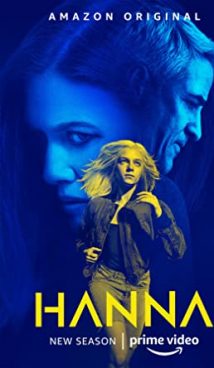 Meet Hanna. At first look, she seems like a nice girl. But in reality, she is the product of the genetic experiments of the CIA, that are trying to create super-soldiers in an Eastern European secret research facility. Many years ago, a mercenary stole Hannah from the facility and raised her in the forests in Poland. Years later, we see Hannah as a killing machine, but at the same time, she is just a girl. She wants to know her origins, but she also wants a life without fighting, death, and murder. Will the CIA let Hannah forget her destiny?

– One of the episodes from the first season of “Hanna” was nominated for an Emmy Award for Best Cinematography.

– Actress Esme Creed-Miles, who is playing the leading role in the series, is not wasting her time and has already shot the short film “Jamie” herself, where she was not only a director but played the main role as well.

– Joel Kinnaman and Mireille Enos met in a fight in the first season. However, once they were partners — they investigated crimes in the American remake of the Scandinavian TV-series “The Killing,” thanks to which they became famous.

– Dermot Mulroney is joining the cast as John Carmichael, a dangerous CIA operative, in the Season 2 of Hanna.

This is an American action drama TV-series based on the movie of the same name by Joe Wright.

The premiere of the Season 2 took place on July 3, 2020 on the Amazon Prime platform.

Both seasons of “Hanna” were filmed for Amazon streaming service.

The studio has not yet decided whether there will be a Season 3.