all-trailers.com > Home page > Movie News > Why Supernatural Fans Might Want To Rewatch Early Seasons Ahead Of The Final Episodes 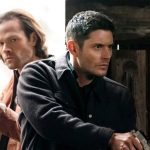 The end is nigh for Supernatural, and fans have a limited number of episodes left to look forward to. According to one star, however, now is also a good time to look back to Supernatural days gone by. A whole lot has changed over the fifteen seasons of the series, even if the focus on saving people and hunting things is still at the root of the Winchesters’ fight. Jensen Ackles, who of course plays Dean Winchester, explained why revisiting earlier seasons could be worthwhile ahead of the finale.

Speaking with TVLine about what remains of Supernatural Season 15, Jensen Ackles shared:

There’s a lot of little nods and little Easter eggs that are filtered in throughout the last couple of episodes that are attributed to episodes that were very early in the series.

Fans couldn’t have possibly guessed back in the early days of Supernatural that the final arc of the series would be about Sam and Dean trying to defeat God with their angel pal and kinda sorta grown-up Nephilim kid, but those earlier seasons evidently could come in handy for recognizing Easter eggs in the final episodes. The Season 15 premiere was actually packed with nods to earlier hunts, including all the way back to the pilot with the Woman in White and Sam saying “We got work to do” over the trunk of the Impala.

Hopefully none of those nods to earlier seasons involve any of the boys’ deaths! Dean in particular has died quite a few times courtesy of Gabriel in his Trickster days. Thanks to showrunner Andrew Dabb, fans can already know two major characters from earlier seasons who won’t be back before the end.

Considering how long Supernatural has been on the air despite everything from a writers’ strike to a pandemic, I’m guessing only the really devoted longtime fans will be able to catch every single nod and Easter egg, but that’s what Netflix is for, right? The full first fourteen seasons are available on the streamer now, along with the thirteen episodes of Season 15 that were completed before the production shutdown earlier this year.

Unfortunately, Jensen Ackles didn’t drop any specifics about episodes from early in the series that fans can expect nods to and should therefore rewatch, which means that fans have well over 300 options to choose from. His statement that some nods will be to episodes that were “very early” may mean as early as the first few seasons, perhaps even before the angels entered the scene and changed Supernatural forever.

For now, I’m pretty concerned about one angel in particular. Castiel may have managed to return from every death so far in the series, but he has never been facing a deal with The Empty as Supernatural slowly but surely runs out of episodes. A recent trailer for the second half of Season 15 leaves me more worried than ever about Cas.