When is Chilling Adventures of Sabrina Part 4 released on Netflix? 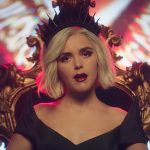 When is Chilling Adventures of Sabrina Part 4 released on Netflix?

The Chilling Adventures of Sabrina has spun its last spell, with the dark fantasy Netflix series (which functions as a semi-spin-off to fellow teen drama Riverdale) set to end after its upcoming fourth installment.

Based on the comics of the same name (which were themselves a reboot of older comics and the popular 90s sitcom), the series developed a devoted fanbase who were devastated when Sabrina’s gothic delights were ended – but at least know they know when they’ll be able to tune into the spellbinding final episodes, which are set to ring in the New Year this winter.

Chilling Adventures of Sabrina Part 3 arrived on Netflix in January 2020 – and season four has now been confirmed to arrive on December 31st, 2020, despite the industry shutdown delaying the production for some months.

Rounding out the Spellman clan led by Kiernan Shipka’s Sabrina are Miranda Otto (Lord of the Rings) as Aunt Zelda, Lucy Davis (The Office) as Aunt Hilda and Chance Perdomo as cousin Ambrose.

Will Season 4 be the last series of The Chilling Adventures of Sabrina?

Unfortunately that’s a yes – unless the series is picked up by another network – with Netflix having announced in July 2020 that series 4 would be the final chapter of the saga.

Showrunner Roberto Aguirre-Sacasa told TV Line, “Working on Chilling Adventures of Sabrina has been an incredible honour from Day One

“The cast, beginning with Kiernan as everyone’s favorite teen witch, has been an absolute joy. I am beyond thankful to the crew, writers, editors, assistants, and everyone for pouring so much love into this dark dream of a show.

“I’m also grateful to our partners at Netflix, Warner Bros., Berlanti Television and Archie Comics for letting us tell the story we wanted to tell, the way we wanted to tell it. We can’t wait for everyone to see Part Four.”