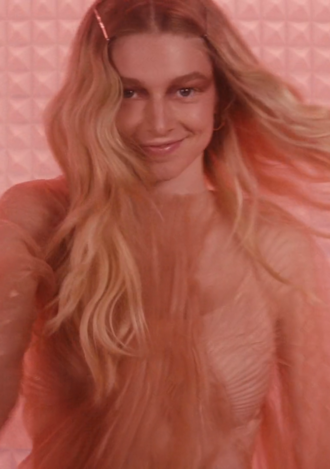 Hunter Schafer is an American fashion model, actress, and LGBTQ rights activist. For her activism against the North Carolina Public Facilities Privacy & Security Act, Teen Vogue listed Schafer on its "21 Under 21" list in 2017. In 2019 she made her acting debut, starring as transgender high school student Jules Vaughn in the HBO television series Euphoria, and will portray Tigris Snow in the 2023 feature film The Hunger Games: The Ballad of Songbirds and Snakes. For her activism regarding HB2, Teen Vogue listed Schafer on its "21 Under 21" list in 2017, and granted her an interview with Hillary Clinton. Schafer has modeled for Prada, Dior, Gucci, Calvin Klein, Rick Owens, Helmut Lang, Tommy Hilfiger, Thierry Mugler, Coach, Maison Margiela, Vera Wang, Marc Jacobs, Versus Versace, Emilio Pucci, Ann Demeulemeester, and Erdem, among other fashion houses. In 2019, Schafer was cast in the HBO series Euphoria, marking her acting debut. She received praise for her performance in the series, and the Primetime Emmy Awards came under fire for omitting her from the nominations along with other transgender actors. Aside from her leading role in the series, she also co-wrote an episode with the show's creator Sam Levinson and served as co-executive producer. Additionally, she collaborated with him so that her character and the show's story reflected her experience. In June 2020, in honor of the 50th anniversary of the first LGBTQ Pride parade, Queerty named Schafer among the 50 heroes "leading the nation toward equality, acceptance, and dignity for all people". In 2021, Time named her to its Next list of "100 emerging leaders who are shaping the future", with a tribute written by Euphoria co-star Zendaya.